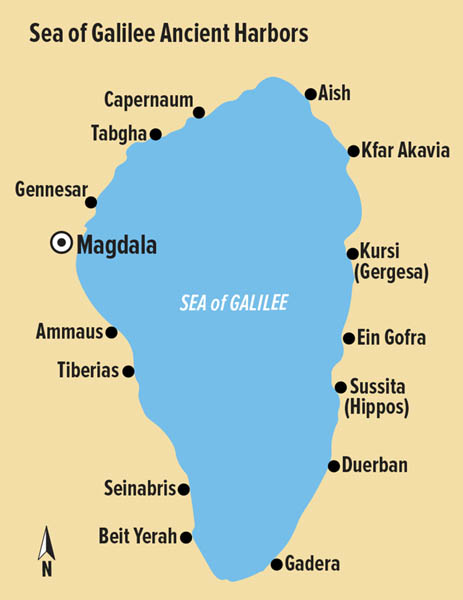 Magdala was the largest and most important city on the Sea of Galilee at the dawn of the Common Era. The first-century Jewish historian Flavius Josephus implies that it was a city of approximately 30,000 people.1 Although there is no archaeological evidence that Jesus visited Magdala, it is almost certain that he did. Matthew 9:35 tells us that “Jesus went about all the cities and villages, teaching in their synagogues, and proclaiming the good news of the kingdom, and curing every disease and every sickness.”
Separate archaeological missions have worked at Magdala over the years: excavations directed by the Franciscans of the Custody of the Holy Land between 1971 and 1976, and again in 2007 and 2008; a salvage excavation by the Israel Antiquities Authority (IAA) between 2002 and 2015; and, since 2010, an archaeological project of the Anahuac University of Mexico South (Universidad Anáhuac México Sur).Somewhat surprisingly, only one synagogue has been discovered at Magdala that apparently served the entire city. But it is a doozy, or, as dictionaries define the word, “unique of its kind.” More on that later.In Jesus’ time, the city was known under its Greek name, Taricheae (from the Greek tarichos, “salted, smoked or dried meat [esp. fish]”). It is mentioned by the Roman polymath Pliny the Elder, who falsely locates it south of Tiberias.2 Josephus correctly locates Magdala 30 stadia (c. 3.5 mi) north of Tiberias. The city is also mentioned by other Classical authors, such as Cicero, Suetonius and Strabo, the latter commenting on its excellent fish, highly esteemed in Roman markets.According to the Talmud, Magdala was a wealthy town and was destroyed by the Romans because of the moral depravity of its inhabitants.Josephus informs us that he made Magdala his base in the north when he led Jewish forces from Galilee against the Romans during the First Jewish Revolt that commenced in 66 C.E. and ended with the Roman destruction of the Jerusalem Temple in 70 C.E.In Christian sources from the fourth century, Taricheae is identified as the home city of Mary Magdalene.3 The importance of this woman in Christian history was reaffirmed by Pope John Paul II. The current head of the Roman Catholic Church, Pope Francis, has called Mary Magdalene the “apostle of the apostles.”

Led by archaeologists Dina Avshalom-Gorni and Arfan Najar of the IAA, an excavation undertaken in Magdala prior to the construction of a hotel discovered a synagogue in 2009.a So far, this is the only ancient synagogue found in Magdala, which still has scholars puzzled.

For this time and place, there should be more than just one synagogue in Magdala.

The building identified as a synagogue might have originally been built as a storeroom on the Sea of Galilee (Kinneret in Hebrew). In its two later phases, the building was used as a synagogue with a stone bench running around the walls on the inside of the main room. Apparently six columns had originally supported the ceiling. A raised platform paved with mosaics surrounds the main room.

The walls were plastered and painted with colored frescoes—dark red, mustard yellow and blue panels set within black and white frames.

In the center of the main room, a rectangular stone was discovered resting on four short legs. This unparalleled object was apparently used as a base for a reading table supporting the Torah scrolls. The four sides and the top surface of the stone are decorated with reliefs that probably give three perspectives of the Jerusalem Temple. The two longer sides show pillared archways with what looks like grain sheaves in between but might instead be another row of arches deeper inside a building; each archway is preceded at its northern end by a hanging lamp or incense vessel. The south-facing short side bears a relief of two rosettes between three pillars and what looks like their negatives beneath them. This motif has been interpreted as two wheels of the divine chariot with flames below them—possibly a hint of the divine presence inside the Holy of Holies (the innermost room of the Tabernacle/Temple).4

A seven-branched menorah on the north-facing short side is incised as standing on a square podium and flanked on either side by a kantharos (large banqueting or ritual cup with two handles); the whole scene is arched over and bordered by columns. This is the earliest representation of a branched menorah in Galilee and the oldest outside Jerusalem.

The top surface of the stone has a six-petalled rosette in the center flanked on either side by a palm tree (or a bunch of palm branches), ivy leaves, two more branches and geometrical motifs.

One would suppose that with the recovery of such an intriguing synagogue, the archaeological community would be satisfied, but in fact, it is just the opposite. Where are the other synagogues in this major city on the Sea of Galilee?, they want to know. Could it be that the rest of the community was not Jewish or was not observant? The answer is no. We now have other archaeological evidence to confirm that the community was indeed Jewish and observant.

In our recent excavation about 230 feet south of the synagogue, we found four ritual purification baths (mikva’ot; mikveh, singular).5

Bathing in the mikveh enables religiously observant Jews to maintain ritual purity. More than 800 mikva’ot have been found in ancient Israel, but not a single one in gentile cities in Judea. Nor have any been identified at other sites excavated around the Sea of Galilee, such as Tiberias, Hammath, Bethsaida or Capernaum. But there is a simple explanation for this: These sites are in close proximity to the Sea of Galilee, which made mikva’ot redundant, as the lake waters could be used for ritual purification.

The mikva’ot of Magdala are unique in that they are the only ritual baths in the Land of Israel to be fed by the infiltration of groundwater.

Magdala is frequently referred to in ancient literature as a safe place good for fishing. While archaeological investigation of the city is far from complete and the Biblical text is not explicit on these points, it is safe to assume that Jesus and his disciples often went to the port of Magdala, working day and night, pulling nets, embarking and disembarking. Remember that Jesus met his disciples as fishermen and made them into “fishers of men” (Matthew 4:19)—a call that would eventually lead to the rise of a new religion.

But let’s not forget that at this point in history we are still talking about a group of Jewish men and women devoted to the laws imposed by the Torah. The recently discovered mikva’ot are a tangible reminder of precisely that. For the same reason, however, one question remains: Are there more synagogues yet to be discovered in Magdala?